Who is this mysterious and extremely talented and attractive half-elf?

here it is finally

My Name is Thateus, I am a ranger/sorcerer with an unwarranted repugnance for anything undead. The major things that you should know about me are that my parents were both powerful and influential leaders of their race, Obviously with their positions a relationship with someone outside of their race, much less a half breed child, had to be kept a secret. I was left at a monastery where I lived such a life of mediocrity that I nearly died of boredom.
Until a newcomer arrived at the monastery when I was about 10 years old. all of the other monks treated him with an almost fearful like respect and when I asked my guardians about him all they would tell me was that he was a monk from a different sort of order and that I should stay away from him. I was naturally curious and I watched the man for about a week, everywhere he went. I didn't learn much about the man following him around the monastery but eventually he left the grounds which is something I had never done… I was torn between following him and turning back. after a moment's hesitation I continued following him. I followed him all the way to a clearing in the forest.
He turned around and told me that I had a lot to learn. from that moment he became my teacher, after a couple years he had to leave the monastery, for the next four years he would return every few weeks to check on my progress and give me more lessons in everything from hand to hand combat and archery to basic arcane knowledge, and history .
Besides this one man the monks were peace-loving and against anything fun or exciting. I did not put much stock into all the religious mumbo jumbo they tried to force feed me and I often snuck away from the monastery, learning of the forest and becoming well versed in the ways of the wild. I practiced my archery, and the other skills the monk had taught me, on my adventures in the surrounding mountains becoming the man I am today. I ventured slightly farther every trip and my trips became more and more frequent.
Finally upon my coming of age they told me about my lineage and that my arrival at the monastery was foretold. they explained the circumstances of my arrival with an almost feverish vigor that confused me. these men were usually so calm and collected. The story they told me began to help me understand why they acted this way. it got my blood boiling, they told me that 20 years before, to the day, a being had appeared in the mists of the monks during their morning prayers. the Being was obviously one of great power but it cloaked itself from them and they were unable to look directly at it. it told them of a boy. a boy that would be born in secret from two great and powerful lines, a boy that would be spirited away in the night and left on their very doorstep. The deity went on to describe a complete prophecy about my life and who I am supposed to become.
Then they told me the worst news I have ever heard, they told me that only 3 years later the monastery was attacked and looted by bandits who took everything including the ornate scrolls that the prophecies were written on. The scrolls were locked by masterwork locks enchanted by the deity to only open when I held the key. so they are still out there somewhere. I left the monastery that night with nothing but my makeshift bow, flute and the key to the scrolls, to begin searching.
When a god leaves a prophecy about your life you need to find it as soon as possible. that was four years ago and I have yet to find my first scroll or to be reunited with the monk that I taught me so much. 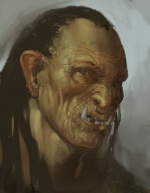