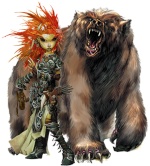 My name is Pai and I am a 38 year old Gnome. I was born in Brastlewark, the capital of the Gnome King. My mother died when she was giving birth to me and I never knew my father. I spent my young years in an orphanage in Brastlewark. I never fit in with my fellow orphans. While the other children were singing or writing poetry, I was dancing. I would run out of the city to play with children of different races because I didn’t fit in with the children of my own race. At the age of 30, I ran away for good, dancing in order to get money for food. Since then I have been going from city to city just trying to survive.

After 6 years of surviving this lifestyle, I was trying to get enough money for food by dancing in a tavern in the city of Cassomir. After that performance, I was leaving the tavern when I noticed a tall half-orc with grey skin and silver hair following me. I thought he was going to attack me and steal all the money I had earned that night, so I started running. I couldn’t run fast enough to lose him so I did a back-flip on to his shoulders and started to pound on his head to try and distract him, but I could tell it wasn’t working because he reached up to grab me but I was too quick for him. I jumped off and started running again. It wasn’t long until I made a wrong turn and came to a dead end in an alleyway. He asked why I was running and I thought it would be obvious so I asked why he was following me. He answered with “Because you’re beautiful. I saw you in the tavern and I wanted to talk to you.” After he said that I relaxed a little bit and said “Why don’t we go back to the tavern to talk?” I didn’t want to be alone with this man twice my size in the middle of an alleyway where no one was around. He agreed, and we walked back to the tavern together. On the way back to the tavern I found out that his name is Haus and he too ran away from home. We talked for hours. He said he was looking for a companion and I said I was alone so we agreed to travel together.

We spent the next 2 years getting to know each other while we traveled from city to city. I earned money while Haus protected me from thieves and monsters that we came across. We make a pretty good team.